In Memoriam: Dr. Richard B. Wesley 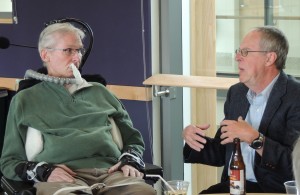 Dick Wesley, seen here chatting with Professor Neil Bruce in May 2014, was honored at the Economics graduate program award ceremony for his staunch support of graduate education.

The University of Washington Economics community was deeply saddened to learn that friend of the department Dr. Richard B. (Dick) Wesley passed away November 20 from complications related to ALS (Lou Gehrig's disease).

Dr. Wesley, a physician who practiced pulmonary medicine for nearly 30 years, upon retirement began taking classes in economics, political science, and international studies through the Access program at UW. The Access program allows Washington residents 60 or over to audit up to two classes per quarter for a fee of $5 per class. Dr. Wesley audited a variety of economics courses, taught by Neil Bruce, Theo Eicher, Haideh Salehi-Esfahani, Rachel Heath, and many others.

In 2011, Dr. Wesley established the Richard B. Wesley Endowed Graduate Student Support Fund in Economics with a gift of $100,000 over two years as a measure of his appreciation for the many professors and graduate students in the department who enriched his experience and welcomed him into their classrooms. Dr. Wesley said of the instructors he had in the department, “Their deep understanding of economics and dedication to teaching is a credit to the University of Washington.”

Dr. Wesley was honored in May 2014 for his contributions to the department at the graduate program awards ceremony. Of his support for graduate education in the department, he said, "I value the teaching I've received from graduate students at UW through the years and believe that it is crucial to maintain strong graduate programs, especially during challenging economic times." Ultimately, what motivated him to give were the friendships he developed with his instructors through his Access classes. "The friendships I have made here have been as rich and meaningful as any in my life,” he said. “If they weren't so special I wouldn’t be here. If they weren’t so welcoming I would have never come back. If I had a message for alumni it would be this – you don’t know what you’re missing.”

In addition to a lifelong interest in art and classical music, Dr. Wesley's pastimes included hiking and camping in the mountains as well as maintaining a vegetable garden and an orchard.

Assistant Professor Rachel Heath, from whom Dr. Wesley took Development Economics, recalled the time when he expressed interest in learning more about corruption. Dr. Heath emailed him a blog post from a prominent development economist who argued that the international aid community is overly worried about fighting corruption. "Dick disagreed so vehemently that he sent me a 5-page rebuttal, complete with references," Heath said. "He told me that his irritation with the blog had lead him to read 50 papers so far, and he planned to read another 50. He thanked me for sending him the post, telling me this was how he learned best."

Principal Lecturer Haideh Salehi-Esfahani, from whom Dr. Wesley took two classes, said "Dick Wesley was a great supporter of our department and a wonderful human being. He was genuinely interested in learning, he contributed to class discussions and was a great inspiration for the much younger undergraduate students in those classes. He will be greatly missed."

Perhaps Professor Neil Bruce sums up Dr. Wesley's impact on the department best: "Those who knew Dick and had the opportunity to learn with him will miss him very much. The department has lost a true and valued friend," he said.

"We should teach every class as though Dick were sitting in the front row."

Memories of Dr. Wesley can be shared through the UW Political Science Department. Donations in his honor can be given to the Richard Wesley Memorial Fund at the University of Washington, which will benefit the areas in the College of Arts & Sciences that Dr. Wesley supported during his life.