Title: This is your brain off Facebook: New evidence on the welfare effects of social media
Summary: The rise of social media has provoked both optimism about potential social benefits and concern about harms such as addiction, depression, and political polarization. Yet we still have little rigorous evidence about its true causal effects. This lecture will summarize new evidence from the largest ever randomized study of Facebook's effects and discuss implications for the future of social media. 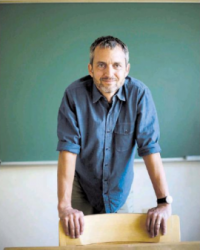 Matthew Gentzkow is Professor of Economics at Stanford University. He received the 2014 John Bates Clark Medal. His research focuses on empirical industrial organization and political economy, with an emphasis on media industries. He is a fellow of the American Academy of Arts and Sciences and the Econometric Society, a senior fellow at the Stanford Institute for Economic Policy Research, and a former co-editor of American Economic Journal: Applied Economics. He was educated at Harvard University, where he earned a bachelor's degree in 1997, a master's degree in 2002, and a PhD in 2004.

Other awards include the 2016 Calvó-Armengol International Prize, the Alfred P. Sloan Research Fellowship, several National Science Foundation grants for research on media, and a Faculty Excellence Award for teaching.

"Markets and Marketplaces: The New and Not So New Economics of Market Design"
Alvin Roth, The Craig and Susan McCaw Professor of Economics at Stanford University and the Gund Professor of Economics and Business Administration Emeritus at Harvard University, is co-recipient of the 2012 Nobel Memorial Prize in Economic Sciences (with Lloyd Shapley) "for the theory of stable allocations and the practice of market design". Roth's research areas include the areas of game theory, experimental economics and market design. He earned his PhD at Stanford University in 1974.

2015: “The Internet and News Media”
Susan Athey, The Economics of Technology Professor, Stanford University Graduate School of Business, Professor of Economics (by courtesy), School of Humanities and Sciences, Stanford University and Senior Fellow, Stanford Institute for Economic Policy Research. Athey was awarded the 2007 John Bates Clark Medal. Her research focuses on the economics of the internet, marketplace design, auction theory, the statistical analysis of auction data, and the intersection of econometrics and machine learning.

2013: “Can Healthcare Competition Work?”
Jonathan Levin, Philip H. Knight Professor and Dean of the Stanford Graduate School of Business and 2011 American Economic Association John Bates Clark Medalist. Levin earned undergraduate degrees in Math and English from Stanford, an M.Phil. in Economics from Oxford University, and a Ph.D. in Economics from M.I.T.

2011: "The U.S. Recession of 2007 - 200?"
Robert E. Lucas Jr., John Dewey Distinguished Service Professor Emeritus in Economics and the College, University of Chicago and Nobel Memorial Prize Laureate in Economic Sciences, 1995,  "for having developed and applied the hypothesis of rational expectations, and thereby having transformed macroeconomic analysis and deepened our understanding of economic policy".

2009: "The Key to Economic Growth: Why Some Nations Flourish While Others Fail"
Daron Acemoglu, Elizabeth and James Killian Professor of Economics, MIT. Acemoglu earned his PhD in 1992 at the London School of Economics. His research interests include human capital, wage inequality, unemployment, search theory, and economic growth. Acemoglu was awarded the 2005 John Bates Clark Medal.

About the Milliman Endowed Lecture

The Milliman Endowed Lecture is made possible by the generosity of Glen and Alison Milliman, who in 1995 established The Glen S. and Alison W. Milliman Endowed Fund in Economics to provide a permanent source of funding for this biennial lecture. Glen is an entrepreneur, with a long career in international trade, and is a philanthropist and leader for many local non-profits. He earned his BA in Economics at UW in 1981. Alison Wyckoff Milliman is a creative leader in the Seattle arts community, a philanthropist and visionary who founded MadArt Seattle, a program that supports the work of emerging artists who showcase their art in surprising venues, themes and creations. She earned her BA in art history at UW in 1984 and went on to study at Christie's in London. In 2012, Glen and Alison established the Milliman Endowed Chair in Economics. Glen and Alison live in Seattle and have three children.