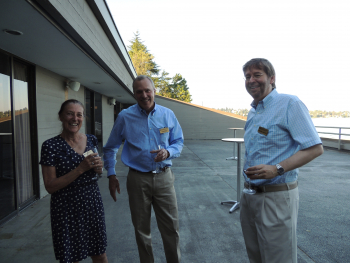 The Department’s Visiting Committee celebrated another successful year at their annual Summer Social Event on July 25th, co-hosted by Cary Oshima and Olga Yang. The event presented an opportunity for the VC to reflect on the past year’s work, and look forward to the next year, all while enjoying each other’s company and beautiful views from the Waterfront Activities Center. Dean Stacey spoke to the needs of the college and how alumni in particular can help going forward, he also thanked the VC for their continued support of the department. We had the opportunity to hear from three recent graduates of the department, who spoke about their experiences in the department, including some favorite classes, or talked about how they wish to apply their economics degree outside of school.

Fahad Khalil, the Chair of our department, spoke to the success of the past year’s fundraising. This past year the VC contributed more than every before, thanks in large part to two matching events. The first, funded by John Stephanus, ran from the beginning of last fiscal year (July 2017) to the end of August 2017. This matched helped jump start our goal for the year, and paved the way for a very successful campaign. The second, dually funded by John Stephanus and Olga Yang, started in June of 2018 and will run through the end of August 2018. This match helped close the fiscal year with a bang, and will help yield another successful year going forward. We are so grateful to our amazing donors and cannot thank them enough for providing so much support for the department!

We were delighted to surprise Olga Yang with the Kathy Gehrt Memorial Volunteer Service award, which was presented to her by former recipient Bob Richards. Established in 2014, the Kathy Gehrt Memorial Economics Volunteer Service Award was named for alumna Kathy Gehrt (BA ’75, MA ’77), who passed away in April and was the posthumous awardee of the inaugural 2014 award. The award seeks to recognize the efforts of a long-term department volunteer who has made a significant difference in the department through his or her involvement.

Olga has been a dedicated alumni for many years, so she was an obvious pick for this honor. She is Chair Emerita of the Visiting Committee, having served as chair from 2008-2010, and is a member of the executive committee. She provides volunteer leadership to the Women in Economics group, in addition to supporting an undergraduate scholarship in the department named for her parents. She has supported the department financially for many years, including the current match fund and co-hosting this year’s Summer Social event. She has been part of the mentorship program since its founding, and has helped lead the program for a good part of that time.

Olga is also spearheading the creation of an endowment to support the mentorship program in perpetuity. The Walter J. Zabriskie Endowment in Economics for Mentorship and Career Development is named for the founder of the mentorship program, Walt Zabriskie. Walt was a dedicated alumnus who has made his mark on the department in many ways. Walt passed away in December after a battle with cancer. Since then, Olga has worked with our advancement department and Walt’s family to establish the endowment in his name.

The evening concluded with conversation and laughter. The Visiting Committee looks forward to another successful year!