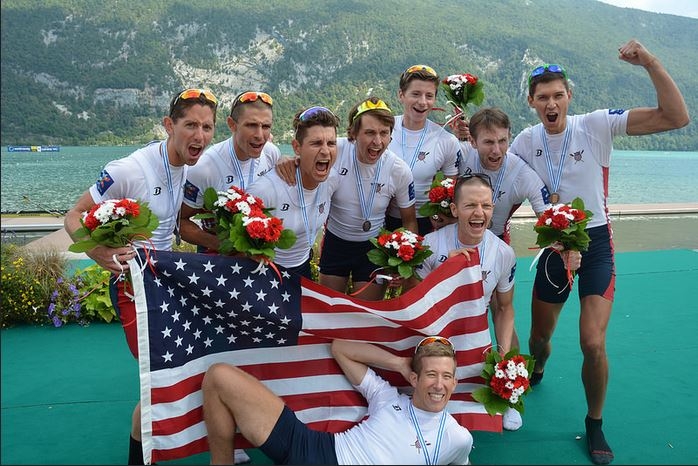 Alex (to the right of the flag) and the US team celebrating their bronze medal (source: http://alex-twist.blogspot.com/)

Update September 2015: Congratulations to Alex Twist and the US team on a hard-earned bronze medal at the 2015 World Rowing Championship, beating out last year's silver and bronze medalists in the process! In a very close finish, USA narrowly beat out Italy for third place, and ended up only 0.27 seconds behind second-placed France as the only American men's crew team to earn a medal. This finish marks the first time the USA has finished in anything other than last place since 2009.

Following his experience in Aiguebelette, Alex has decided to leave the UW Economics graduate program to pursue his passion of rowing at a world-class level. He will finish up in December having completed his MA in Economics. The story below was published in July and highlights Alex's path to competing in the World Championship.

More information about the championship, inlcuding photos and video clips, can be found here: http://www.worldrowing.com/events/2015-world-rowing-championships/.

Fourth-year Economics PhD student Alex Twist has come a long way since 2004, the year he starting rowing at the University of Puget Sound as a walk-on, with no previous experience. Fast forward 11 years, Alex will be representing the United States in the 2015 World Rowing Championship in Aiguebelette, France. However, the path from walk-on to world championship competitor has not always been straightforward.

Alex’s success as a novice at UPS encouraged him to stick with the sport. As well as earning a silver medal at the regional championship, Alex was a part of UPS’ first team to compete in the collegiate national championship. But alongside a focus on rowing, he also pursued another life goal, and was admitted to the PhD program in economics at the University of Oregon. Finding a balance between his academic and athletic goals was challenging – although Alex coached and rowed in a single scull while at Oregon, he missed the high level training and competition he had experienced in his previous collegiate team.

The clock was also ticking. The 2012 Olympic Trials were approaching, and Alex knew that if he were to have a chance to make the team, he needed to make some changes. A long-term leave of absence at Oregon became a withdrawal, as he moved to Seattle to begin training under coach Conal Groom. Not wanting to give up on his academic goals either, Alex applied to and was accepted into the Economics PhD program at UW.

Progress was slow at this level of racing, and Alex frequently found himself near the back of the pack in national races. However, each race, he was getting a little faster. In one of the best performances of his life, he finished 5th in the lightweight men’s double scull at the Olympic Trials, narrowly missing out on a place on the Olympic team.

That could have been the end of the story for Alex and rowing. The PhD program took much of his time, as he navigated coursework and exams and began to focus on developing his research ideas. Even so, the dream of representing the US in rowing was still there, and Alex recognized that his window of opportunity was only getting smaller. A short period of academic leave was approved to allow him to pursue a path to the US National Team for the 2015 World Rowing Championship, which involved traveling around the country to find a team on which to compete. A training camp in Boston provided the opportunity, and after two weeks of daily testing, Alex learned that he had secured a place on the lightweight eight.

So, from August 30 to September 6, 2015, in the idyllic setting of Lac d’Aiguebelette, near Lyon, Alex Twist will finally fulfill his 11-year dream – representing the US National Team.