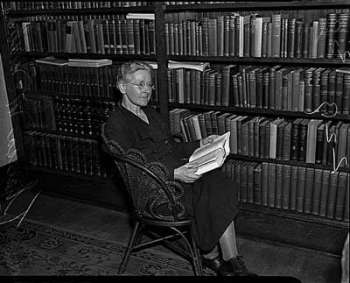 Spend a few days on the University of Washington campus and you’re likely to hear the McMahon name ripple through conversation on more than one occasion. McMahon Hall, one of the UW’s oldest and largest student dormitories, towers over North Campus as a lasting tribute to Professors Edward and Theresa McMahon, two of the first, and most beloved, instructors at the University’s present location.

Theresa (Schmid) McMahon was born April 29, 1878 in Tacoma, Washington and grew up on Mercer Island. A talented student from the start, McMahon attended school on Mercer Island and entered the University of Washington as a pre-freshman at the age of 16. Here she would study under the esteemed professor J. Allen Smith and would come to meet her future husband, Edward McMahon.

Upon completion of her undergraduate studies, with her Bachelor's degree in English in hand, McMahon taught briefly at a Seattle high school before she and her husband enrolled in PhD programs at the University of Wisconsin, where Theresa completed her doctorate in sociology, which also housed economics. The pair later returned to the University of Washington where they would teach until their retirement: Theresa in the Department of Economics, and Edward in the Department of History.

McMahon began teaching in the UW Department of Economics in 1911, under the leadership of her former instructor, J. Allen Smith. She taught courses in elementary economics and labor history and became an outspoken proponent of worker’s rights, labor unions, and the eight-hour workday. A "noted Liberal" and "activist professor," McMahon researched and wrote widely on women's rights and labor rights, such as in her 1925 book "Social and Economic Standards of Living."

Despite being extremely well-liked by students, McMahon’s liberal ideologies did not sit well with the University administration; she was threatened with dismissal on several occasions. McMahon was also made the victim of the University of Washington anti-nepotism laws of the 1930’s when she was encouraged by then-President Sieg to resign.  These laws, implemented by Sieg, sought to eliminate the dual employment of spouses within the university system. McMahon fought these attacks with tact and grace and her students and peers rallied behind her in support.

Younger students slip into her classes because she is known to have a big heart and give a square deal. Older students seek her out because she’s an inspiration…Into the pocket of economics she puts a heart, a soul…To us students, Mrs. McMahon stands splendidly defiant—an advocate of justice and individualism…Her classes are hotbeds of criss-cross opinions. They are vital, enthusiastic gatherings brought down to earth, discussions of the very wolf at the door.

Upon her retirement in 1937, the Department of Economics presented Dr. McMahon with a bound book of letters from former students, colleagues, and friends. The heartfelt words that covered those pages were a testament to her legacy.

Professor McMahon, who suffered from terrible arthritis and near blindness in her later years, wrote an autobiographical memoir, “My Story,” in 1959 with the help of a voice recorder. She shared this work with many of her close friends in the years that followed. Former UW Economics Professor Henry Buechel  wrote this in response to reading her story:

What a rich and full life you lived! It occurred to me again and again, as I shared your experiences, how little the cowardly and too-ambitious get out of life! It’s those who stand for right and justice that have a chance to savor life to the full. I congratulate you upon having fought the good fight with never wavering. How few are finds like you in universities today. Perhaps, you fought your fight too well and there isn’t much left for which to fight… Had I known you in your earlier years, I think “dauntless” would be the word to describe you.

Dr. McMahon passed away on June 27, 1961 at the age of 83. Learn more about her and her role in the labor struggles of women during the Depression at the Pacific Northwest Labor & Civil Rights Projects.