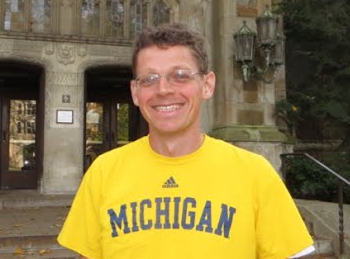 The Department of Economics is delighted to announce that Alan Griffith has accepted an offer to join us as a tenure-track assistant professor starting Autumn quarter 2017.

Griffith expects to complete his PhD in economics this May at the University of Michigan, where he is also a Pre-doctoral Trainee at the Population Studies Center with the Institute for Social Research. Griffith has held an Economic Demography Fellowship with the Center since September 2014.

Within his broad interest area of applied microeconomics, Griffith’s research comprises development economics, labor economics, industrial organization, applied econometrics, and the economics of networks, with particular focus on the causes and effects of social networks on behavior and economic and educational outcomes. His job market paper “Random Assignment with Non-Random Peers: A Structural Approach to Counterfactual Treatment Assessment” considers network endogeneity within a new framework for estimating peer effects.

At Michigan, Griffith taught courses on statistics, econometrics, and development economics and welcomes the opportunity to teach in his research areas of structural estimation, program evaluation, and the economics of social networks at UW.

Originally from Memphis, Tennessee, Griffith did his undergraduate studies on a four-year Presidential Scholarship at American University in Washington, D.C., completing a double major in Economics and Political Science with a minor in Math. He completed his J.D. at the University of Virginia School of Law in 2009, where he graduated in the top 10% of his class and was an articles editor for the Virginia Tax Review. Griffith practiced trial law as an associate attorney for two years in Atlanta, Georgia, before relocating to Ann Arbor to begin his graduate studies in economics.

In his free time, Griffith enjoys distance running and ‘frolicking in the mountains’ – ideally at the same time. He is undoubtedly pleased to be moving to the Pacific Northwest, where both distance runners and mountains abound.

The Department of Economics is excited to welcome Griffith to the faculty this fall and extends its thanks to the search committee members: Professors Patrick Bajari (Chair), Yanqin Fan, Jacques Lawarree, and Eric Zivot.