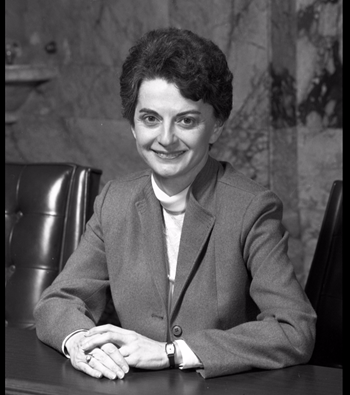 The Department of Economics was deeply saddened to learn of the passing of alumna Helen Sommers (BA ’69, MA ’70), a Washington State Representative (D-36th district) for 36 years, longtime member of the Economics Visiting Committee, and the department’s Distinguished Alumna in 1995. She was 84.

Sommers, who retired from public service in 2008, is credited with the development of a robust public employee pension system, and for laying the foundation for the branch campus system of our state universities. She was additionally a powerful advocate for state-funded university research, equitable access to public education, women’s rights and family planning. She participated in many community and political activities during her career, from the Women’s Political Caucus and Seattle’s League of Women Voters to board positions at the Nordic Heritage Museum, UW Alumni Association, and the Pacific Science Center.

“Helen Sommers was a true champion of public higher education and her advocacy for our state’s students and universities changed the lives of countless Washingtonians,” wrote UW President Ana Mari Cauce. “It is impossible to overestimate the benefits Helen’s life and leadership had on the state of Washington.”

Her leadership and accomplishments were recognized by the department in 1995 when Sommers was presented with the Economics Distinguished Alumni award, the first woman to be acknowledged with this honor. This award recognizes someone whose professional achievements and cumulative contributions have brought personal distinction and honor to their alma mater. Sommers gave the keynote address to department graduates at the commencement ceremony that year.

The UW Board of Regents also honored Sommers’ achievements with the first and only University Regents Medal in 2008. The Regents Medal recognizes exceptional accomplishments by an individual or organization, particularly in service to humanity.

Sommers grew up in Woodbury Heights, New Jersey, in the 1930's. When she graduated from high school, she went to work as a clerk at Mobil Oil, where she was given the opportunity to go to Caracas, Venezuela in 1954. While there, she decided to take college correspondence courses and enrolled in a program at UW. She had never visited the northwest before 1965, when she came up for summer school. She moved to Seattle in 1968 to attend UW, and lived in the region until her retirement, when she relocated to Florida.

Faculty, alumni and friends of the department join many in our state in mourning the passing of Representative Helen Sommers. Information about her memorial services will be shared as it become available.