Visiting Committee Summer Social: An Evening Aboard The Virginia V 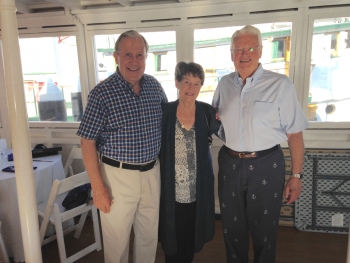 The Visiting Committee held their Summer Social event on July 20th aboard the Virginia V Steamer, hosted by Tom and Carol Olson. This annual event celebrates the VC for all their hard work and dedication to the department. There was a lot to celebrate this year – not only did the Visiting Committee raise the most funding to date in the 2016-2017 academic year, but they also had the highest rate of donor participation since their founding.

At the event, three honorees were recognized. Bob Richards was presented with this year’s Kathy Gehrt Memorial Economics Volunteer Service Award, which recognizes the efforts of a long-term department volunteer who has made a significant impact on the department. The award was named for and first awarded posthumously to Kathy Gehrt, who exemplified these characteristics and many others.

Both Parker Sroufe and Walt Zabriskie were recognized as emeritus VC members. The Visiting Committee developed the Emeritus Membership honor this year as a way to recognize past VC members who have made extraordinary and long-standing contributions to the department.