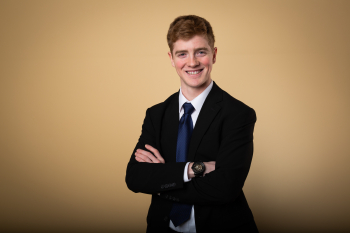 The Department of Economics is delighted to announce that economics major Alexander Peterson has been named a recipient of the 2017-2018 President’s Medalist Award. Alexander will be awarded the Sophomore Medal at a private reception with University President Ana Mari Cauce. The awardees are selected by a committee that evaluates the students’ GPA, rigor of classes, and number of honors classes taken in all previous quarters. Students do not apply for this award; it is meant to celebrate the top student in each class.

Alex Peterson is pursuing a Bachelor of Science in Economics with a minor in Statistics. Since high school, his interests have primarily been politically oriented. From 2015-2016, he served as the chair of the Washington State Legislative Youth Advisory Council to the State Legislature. He has been very involved in the ASUW student government since autumn quarter of his Freshman year, serving in the ASUW Senate, Office of Government Relations Legislative Steering Committee, and serving as the Senate's liaison to the Services and Activities Fee Committee. He has also been on the HUB Board of Representatives since the beginning of his sophomore year.

Alex chose to study economics in order to more deeply understand some of the issues he is most passionate about. “Studying economics has been one of the ways for me to better understand the complicated factors surrounding unemployment, how technology churns the job market, long-term growth, issues of the trade balance, et cetera, to hopefully be a more effective public servant in the future.” Alex is also in the interdisciplinary honors program, which has provided him with the opportunity to explore a variety of topics such as music, linguistics, leadership development, and bioethics, to name a few.

In the summer between his freshman and sophomore years, Alex received a Fulbright Summer Institutes Scholarship to study Middle Eastern politics at the University of London. While in the UK, he also had the opportunity to discuss the economic implications of ‘Brexit’ with a member of the British Labour Party.

Alex has taken advantage of living in an academic setting, and has been able to learn more about issues that are most important to him. “Throughout my time at UW, I've also conducted research on national police violence through the department of statistics, as well as researching the revival of the Hebrew language while studying abroad last summer in Israel.”

After graduating, Alex plans to attend law school with the ultimate goal of a career in politics. Alex explains that serving on the U.S. Council of Economic Advisers is also a dream of his, so he is also considering pursuing a PhD in economics. Alex grew up in Snohomish, Washington, attending Cedar Park Christian High School in Mountlake Terrace. He has always enjoyed writing and playing music, and within the past couple years, has developed a love of hiking and camping.