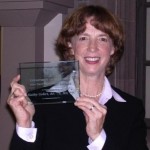 Kathy receiving the award as the 2004 Economics Distinguished Alumna

The Department of Economics is deeply saddened by the recent death of alumna Kathy Gehrt. Kathy passed away April 22 at her home from complications related to a brain tumor.

Kathy earned both her BA (’75) and MA (’77) degrees in economics at UW, and was an active volunteer and supporter of the department. In addition to serving on the Economics Visiting Committee continuously since 1998, and as the first female chair of the committee from 2004-2006, Kathy was also an undergraduate mentor to several students and spoke frequently at student-run career seminars. She had been an annual supporter of funds in the department that provide student scholarships since 1994.

Kathy was honored by the department in 2004 as the Economics Distinguished Alumna, an award that recognizes an alumnus whose professional achievements and cumulative contributions have brought personal distinction, enhanced the profession, improved the welfare of the general public, and brought honor to their alma mater. She gave the commencement address to the department’s graduating class of 2004.

Kathy spent 25 years in the telecom industry in a variety of executive positions with Pacific Northwest Bell and later AT&T. At AT&T, she established the first remote test center in Seattle – a state-of-the-art 24/7 customer service center for testing and managing the repair of data circuits. After being promoted to an executive sales position, Kathy negotiated multimillion dollar contracts with AT&T’s Fortune 500 clients, such as Starbucks, Boeing, Safeco, Costco, and Amazon.com. Twice, Kathy was appointed to AT&T’s Council of Leaders, an honor reserved for the company’s top 1% of executives.

Kathy was a committed community supporter and philanthropist, serving as Board President of the Crisis Clinic and President of the Totem Girl Scout Council. Additionally, she taught macroeconomics at Keller Graduate School of Management, and statistics at City University. Kathy was also passionate about lavender, having written a popular cookbook, “Discover Cooking with Lavender,” and maintaining a comprehensive blog and newsletter about lavender, while also teaching cooking classes at regional culinary shops and lecturing at lavender festivals.

Kathy’s generous nature and enthusiasm for life were infectious. She will be greatly missed by her many friends in the department.