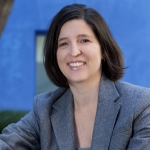 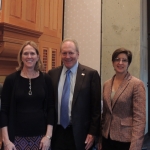 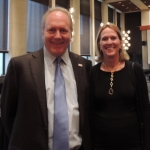 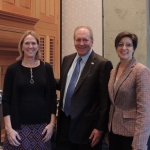 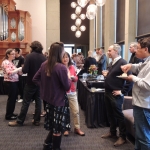 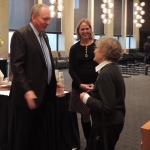 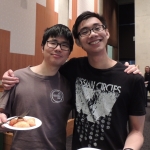 Dr. Susan Athey, The Economics of Technology Professor at Stanford University Graduate School of Business, gave the 2015 Biennial Endowed Milliman Lecture in Economics on May 5 to a capacity audience. Her talk, "The Internet and News Media," explored her recent research into the impact of online publishing, online advertising, and news aggregators on internet news consumption.

Professor Athey received her bachelor's degree from Duke University and her Ph.D. from Stanford, and she holds an honorary doctorate from Duke University. She previously taught at the economics departments at MIT, Stanford and Harvard. In 2007, Professor Athey received the John Bates Clark Medal, awarded by the American Economic Association to “that American economist under the age of forty who is adjudged to have made the most significant contribution to economic thought and knowledge.” She was elected to the National Academy of Science in 2012 and to the American Academy of Arts and Sciences in 2008.

Professor Athey’s research focuses on the economics of the internet, online advertising, the news media, marketplace design, and the intersection of computer science, machine learning and economics, and most recently virtual currencies. She advises governments and businesses on marketplace design and platform economics, notably serving since 2007 as a long-term consultant to Microsoft Corporation in a variety of roles, including consulting chief economist.

In 2013, the  Milliman Lecture was delivered by Jonathan Levin, the Holbrook Working Professor of Price Theory and Chair of the Economics Department at Stanford University. He is also Professor by Courtesy in the Stanford Graduate School of Business and Senior Fellow at the Stanford Institute for Economic Policy Research. Levin earned undergraduate degrees in Math and English from Stanford, an M.Phil. in Economics from Oxford University, and a Ph.D. in Economics from M.I.T. In 2011, Dr. Levin received the American Economic Association’s John Bates Clark Medal as the economist under the age of forty who has made the most significant contribution to economic thought and knowledge. His research is in the field of industrial organization, particularly the economics of contracting, organizations, and market design. Dr. Levin's  Milliman lecture was "Can Healthcare Competition Work?"

In 2011, the Milliman lecture was delivered by Robert E. Lucas, Jr., the John Dewey Distinguished Service Professor in Economics at the University of Chicago. He received a BA in history in 1959 and his Ph.D. in economics in 1964, both from the University of Chicago. He previously taught at Carnegie Mellon University before returning to his alma mater in 1975. Dr. Lucas was awarded the Economics Nobel Prize in 1995 for his "theory of rational expectations." His Milliman lecture was "The U.S. Recession of 2007 - 201?"

In 2009, the Milliman lecture was delivered by Daron Acemunglu, the Elizabeth and James Killian Professor of Economics at the Massachusettes Institute of Technology. Acemoglu completed his PhD in economics in 1992 from the London School of Economics. In 2005 he received the John Bates Clark Medal awarded to economists under forty judged to have made the most significant contribution to economic thought and knowledge. His Milliman lecture was "The Key to Economic Growth: Why Some Nations Flourish While Others Fail."

About the Milliman Lecture in Economics

Glen is an entrepreneur, with a long career in international trade, as well as a philanthropist and leader for many local non-profits. Glen’s career in international trade includes the founding of Island Soda beverages, and the selling of soft drinks throughout the Pacific Islands for more than 20 years. His work in the Seattle community includes chairman of Odyssey Maritime, serving on the Department of Economics Visiting Committee, and as a member of the UW College of Arts & Sciences Advisory Board; he is currently the Museum of History and Industry’s (MOHAI) capital campaign co-chair. Glen earned his BA in economics from the UW in 1981. Alison is a creative leader in the Seattle art community, a philanthropist and a visionary. She earned her BA in art history at UW and went on to study at Christie's in London. Her work in the community includes leadership positions as chair of the School of the Arts Board at University of Washington; past board member of the University of Washington Foundation Board; and past chair of the TEW Foundation and Wyco. Glen and Alison live in Seattle and have three children.

The Department of Economics is grateful for the friendship and support of the Millimans.