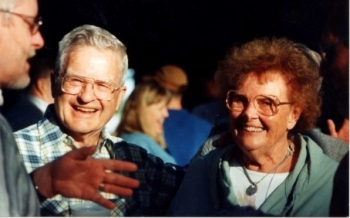 Jim Crutchfield and his wife in 2000. Photo courtesy the International Institute of Fisheries Economics & Trade.

The Department of Economics was saddened to learn of the death of Professor Emeritus James A. (Jim) Crutchfield, who passed away April 30 at the age of 96. A specialist in natural resource economics, Professor Crutchfield taught in the Department from 1949 – 1982 and held a joint appointment with the UW Institute for Marine Studies, in addition to an adjunct appointment with the Institute for Environmental Studies.

Widely considered a founder in his field, Professor Crutchfield developed a course in natural resource economic policy that was one of the first of its kind in the country. The multidisciplinary nature of the course attracted students from a variety of disciplines, particularly graduate students in Aquatic and Fishery Science. He is remembered as an extraordinarily engaging speaker whose students incorporated his speaking style and idioms long after they finished his course.

Professor Emeritus Gardner Brown, who was hired in 1965 with significant input from Professor Crutchfield, remembers Crutchfield fondly as a considerate, kind, and accommodating colleague and researcher who sometimes took on more than he could handle. Brown recalled one point when Professor Crutchfield was involved with so many different research projects, his allocated time to research grants and to teaching came to about 250%. Several of these projects are highlighted on Crutchfield's 1979 curriculum vitae.

Professor Crutchfield was born in 1918 in Connecticut, the son of a naval officer. Completing high school at just 15, he went on to earn his Bachelor’s and Master’s degrees in economics at UCLA, and his PhD in economics at Berkeley.

After retiring from UW, Crutchfield continued working in a consulting capacity and was a founder of the firm Natural Resource Consultants in Seattle. Already widely traveled, having done work during his career on Lake Victoria in Africa and in South America, in retirement Professor Crutchfield continued to travel frequently and putter around the San Juan Islands in his boat.

A celebration of life for Professor Crutchfield will be held on Sunday, June 14 at 1 p.m. at the Lake Forest Park Civic Club. A full obituary and opportunity to leave remembrances can be found here: Jim Crutchfield obituary.