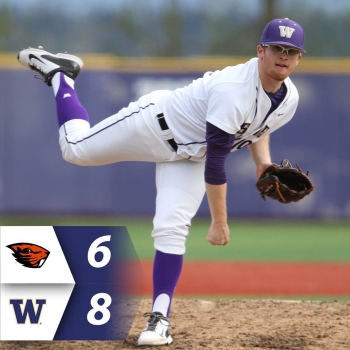 As many of our alumni and current students could tell you, successfully pursuing an economics major at UW - with its competitive admission and intense math focus - is not easy.

Doing so while also putting in hours of grueling practice to maintain sporting excellence is even harder. However, recent alumni Tyler Davis, Jennifer Yang, Ryan Minkoff, and Jaleecia Roland, and current senior Finn Schroeder, have done just that, earning accolades for themselves and their teams along the way.

As many of his classmates were preparing for the Economics Department Graduation Ceremony on June 10, right-handed pitcher Tyler Davis (BA 2015) could be excused for having his mind elsewhere. June 10 was also the final day of the Major League Baseball Draft, and Davis did not have to wait long to hear his name called by the Texas Rangers in the 23rd round. He finished his final season as All-Pac-12 (for the second year running) and as Pac-12 Baseball Scholar Athlete of the Year. Davis ranks in the UW top 4 in innings pitched, strikeouts, wins, and multiple other stats – even more impressive considering he’s following in the footsteps of two-time Cy Young Award winner Tim Lincecum. Read more about Tyler in a recent Seattle Times article.

Jennifer Yang (BA 2015) has been a key member of the number 1 ranked UW women’s golf team, helping them to multiple tournament wins this year even as two team members left to turn pro. Yang worked especially hard after her junior year, getting a new coach and making major changes to her swing. As a result, she lowered her scoring average by more than two shots, was named Pac-12 Golfer of the Month in March 2015, and finished her senior year as the 77th ranked amateur golfer in the world. Read more about Jennifer's accomplishments.

Ryan Minkoff (BA 2015) will be heading a lot farther afield after graduating, to the small town of Lapua, in Finland, to be precise. Minkoff, recent president of the UW Ice Hockey Club and holder of multiple scoring awards, becomes the first UW hockey player to sign a professional contract to play in Europe. Ryan was a participant for two years in the Economics undergraduate mentor program and hopes to become a mentor himself to Economics undergrads, particularly those interested in moving abroad after graduation. Read more about Ryan here.

Track-and-field competitor Jaleecia "Leecie" Roland (BA 2015) faced tough competition in her primary events of triple jump and high jump, but earned Pac-12 All-Academic honorable mentions in her final two years. Leecie also overcome a worrying illness earlier in her athletic career, as doctors struggled to explain her debilitating symptoms of extreme lethargy, migraines, and chest pain. She was ultimately diagnosed with a rare heart valve condition. After a year of recovery, she was able to perform again at a high level, leading to her recent success at UW.

nn Schroeder made a splash (or perhaps more of a controlled ripple) at the recent Intercollegiate Rowing Association championships as part of the team that swept all five heavyweight races. The second varsity eight beat Princeton by more than a second for UW’s 10th 2V8 win in the last 12 years. Finn is an international student from Lubeck, Germany and a participant in the Economics undergraduate mentor program. Read more about Finn's accomplishments here.