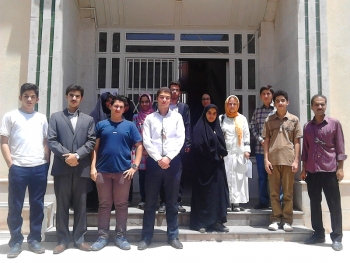 Dr. Salehi-Esfahani, standing on the step in white, with several of the gifted high school students she met during her visit 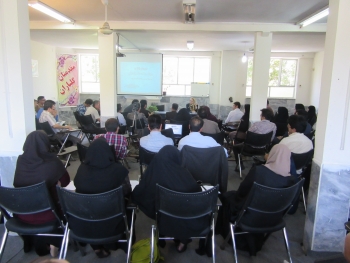 I had the pleasure of visiting my hometown in Iran, the city of Neishabour (aka Nishapur) in late June and early July of this year. Neishabour is a city whose origins go back to 4th century AD. It was a major center of culture and commerce during the Samanid dynasty during 9th century AD. The influential mathematician/philosopher/poet of the 11th Century, Omar Khayyam, was born in this town, lived, worked and passed away there. His mausoleum is a major tourist attraction in the city.

On this trip I was invited by the local branch of the Ministry of Education in Neishabour to present a talk to K-12 teachers on the system of education in the U.S.  While my talk was organized in less than 3 days, I was surprised to see a large room filled with enthusiastic teachers, superintendents and officials of the ministry of education in the city. I am no expert in the K-12 education system but through the years, I have learned a bit and gathered insights from my husband who is a professor of education. I presented the basic information about the types of schools, the curriculum,  and some of the debates around voucher versus public schools.

After my talk ended, there was a period of Q&A which lasted well over an hour. Teachers there asked about various aspects of education in the U.S., with questions ranging from academic issues to concerns about the economic and social standing of teachers in the U.S. Some of their questions included:

In the last few minutes of the session, the organizers played the music video "The Wall" by the British rock n' roll group Pink Floyd. The song is a dark satire on the state of formal education. Interestingly, one of the teachers had prepared a Farsi translation of the lyrics of the song and read it for the audience before the video clip was played. All in all, it was a fascinating meeting, and hopefully it was useful for the audience.

On the following day I was invited to meet with some of the gifted high school students of Neishabour in a research center where the building had been donated by a local philanthropist. The center was managed by a number of high school teachers who mostly worked for free and devoted their after school time to working with students in this center. The building is small but very well used with areas for hands-on learning in physics, chemistry, environmental sciences, and information technology.

Following the tour of the building and the facilities, I sat with some 10 students, half boys and half girls, and we discussed issues of interest to them in their learning and research. Among them are students working in the field of nanotechnology, a student who was working on creating improved traffic devices for rural roads around the city, and a young woman of 17 who had created a new type of roof covering for homes made out of local recycled materials who was seeking assistance from the town officials to have the formula and the process patented. We also touched on their interest on globalization, development, and social issues.

On the whole I came away with the impression that these young people are bright, hopeful, active, resourceful, and engaged in creating a better future for their country.