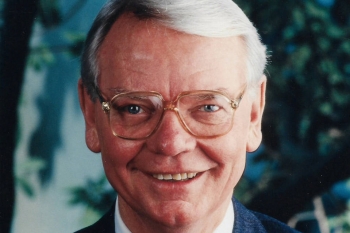 The Department of Economcis was saddened to learn of the death in December 2016 of longtime department supporter and Visiting Committee member Louis "Lou" Pepper of lymphoma. He was 92.

Pepper, who retired as CEO of Washington Mutual in 1990, joined the Economics Visiting Committee in 1993 as one of the founding members, all of whom recognized that to the extent that the individual and collective expertise and wisdom of the local business community is valued by department stakeholders, the business community would support the efforts of the department and work to advance its mission. These founders were instrumental in establishing the Economics Endowed Fund to support the long-term financial health and stability of the department. Recently the fund has been used for faculty recruitment and research support for current faculty.

Well-respected and known in the business community for his caring approach toward the people that worked with and for him, Pepper was a committed family man, veteran of the Pacific theater in WWII and a consummate philanthropist. Professor Emeritus Charles Nelson, who Chaired the Department of Economics from 1979 - 1984, recalled that "Lou was one of the spark plugs on the Visiting Committee, full of enthusiasm for the mission of the department and the University of Washington," despite earning his BA in economics and his JD from the "other UW", the University of Wisconsin.

"He was a fine man who had quite a career," Professor Emeritus Richard Parks said of Pepper. Professor Parks lives at the Skyline Retirement Community in Seattle where Lou moved in 2014, and the two saw each other frequently. Pepper's obituary notes his thanks to the community at Skyline for making life enjoyable.

Even those who didn't know Pepper thought highly of him. "I admired Lou from afar," said Jeff Roe, President and CEO of Premera Blue Cross and a member of the Economics Visiting Committee.