Graduation marks a major turning point in students' lives, and to celebrate and honor their achievements, over 900 students, faculty, alumni, family members, friends, staff, and Visiting Committee members packed into the HUB Ballroom on June 6. Distinguished alumna Gita Gopinath (MA '96), currently the John Zwaanstra Professor of International Studies and of Economics at Harvard University, gave the keynote address. In her remarks, she noted that a degree in economics conveys many advantages, and encouraged students not to mimic others, but to draw on their own unique strengths and experiences both in their careers and more broadly in life.

Three hundred and seven undergraduate students have completed, or expect to complete, their degrees during the period from Autumn 2016 to Summer 2017. Of those, approximately two-thirds are earning the bachelor of arts and one-third the bachelor of science. In addition, numerous students were honored for receiving scholarships, fellowships, and an outstanding paper award.

Eight PhD students were recognized for completion of their degrees in a doctoral hooding ceremony, the culmination of years of hard work and dedication. Their dissertations covered topics as diverse as applications of machine learning in the housing market, women's labor migration in developing countries, and contract theory and mechanism design, to name just a few. 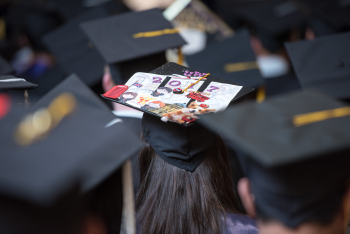 Each year, two other special awards are given to recognize exemplary service to the undergraduate program, both named in honor of beloved former professor Henry T. Buechel. Lecturer Melissa Knox received the Buechel Award for Distinguished Undergraduate Teaching, whereas alumna, visiting lecturer, and current Visiting Committee chair Christina Tapia (PhD '09) was honored for her service with the Buechel Award for Outstanding Contribution to the Undergraduate Program.

To all those moving on to the next stage in life as part of the Economics Department's Class of 2017, many congratulations!