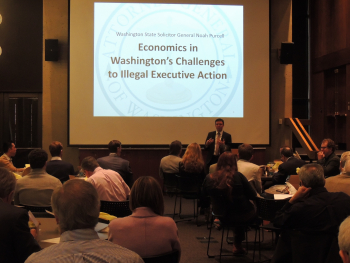 On November 1st, 2017, the Visiting Committee held their first meeting of the 2017-2018 academic year. Members of the VC, guests of the department, and faculty members attended the meeting.

The accomplishments of the Visiting Committee were highlighted at this meeting, which included celebrating the success of last academic year’s fundraising campaign, and the anticipated success of the current year’s campaign. Christina Tapia was also unanimously elected to continue her role as Chair of the Visiting Committee for the next two years. Her new term will start January 1, 2018.

The meeting featured keynote speaker Noah Purcell, Solicitor General of Washington State. Noah’s work gained fame last January, when his office successfully argued the constitutionality of the new  administration’s first travel ban. His talk largely focused on this topic, along with highlighting the work is office is doing in Washington State.   Noah Purcell is an alumnus of the department.  He graduated in 2002 before getting his law degree from Harvard Law School.

The next meeting will take place on January 31st, and will feature Professor Jacob Vigdor, who led the University’s most recent study of the effects of Seattle’ $15 minimum wage law.