Ambassadors Visit the Economics of the European Union Course 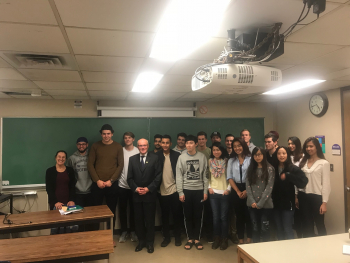 This quarter, the undergraduate course on the European Union received visits from two diplomats. Students in Principal Lecturer Michelle Turnovsky’s Economics of the European Union course were treated to lectures and discussions with both his Excellency Dirk Wouters, the Ambassador of Belgium to the United States, and from Boris Ruge, the former Ambassador of Germany to Saudi Arabia, now Deputy Chief of Mission at the German Embassy in Washington, DC.

The Honorable Mr. Wouters gave an insightful presentation about the political and economic aspects of the European Union, highlighting the organization’s goal to integrate the various economies of the EU member states. Prior to his current appointment, he had served as the Belgian Ambassador to the European Union.  His visit was sponsored by the World Affairs Council of Seattle. Mr. Boris Ruge then gave a seminar on the future of the EU; his visit was sponsored by Center for West European Studies at UW.  Both lectures were followed by exciting and lively discussions with the students.

The Department of Economics was deeply honored to host the two diplomats.