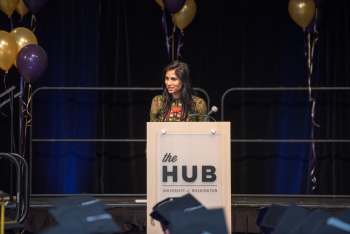 UW Economics 2017 Distinguished Alumna Gita Gopinath has been appointed as the Economics Counsellor and Director of the International Monetary Fund (IMF) by Managing Director, Christine Lagarde. “Gita is one of the world’s outstanding economists, with impeccable academic credentials, a proven track record of intellectual leadership, and extensive international experience,” Ms. Lagarde said. “All this makes her exceptionally well-placed to lead our Research Department at this important juncture. I am delighted to name such a talented figure as our Chief Economist.”

Dr. Gopinath is the John Zwaanstra Professor of International Studies and of Economics at Harvard University, where she has been on the faculty since 2005, having received tenure in 2010. Her research focuses on International Finance and Macroeconomics. Prior to her appointment at Harvard, Gopinath served as an assistant professor of Economics at the University of Chicago Graduate School of Business.

Gopinath is the Co-Director of the International Finance and Macroeconomics Program the National Bureau of Economic Research (NBER), a visiting scholar at the Federal Reserve Bank of Boston, a member of the economic advisory panel of the Federal Reserve Bank of New York, a Managing Editor of the Review of Economic Studies, and is co-editor of the current Handbook of International Economics. She also served as a member of the Eminent Persons Advisory Group on G-20 Matters for India's Ministry of Finance. In 2011, she was chosen as a Young Global Leader by the World Economic Forum.