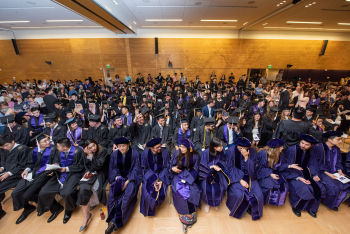 On June 11th, 2019 the Department of Economics celebrated the success of our students at the annual graduation ceremony. Over 240 undergraduates received either a Bachelor of Arts or a Bachelor of Science in economics. In addition, nine PhD students were hooded and presented with their degrees, an achievement that this group has been working on for an average of 5 years.  Over 1200 family members, friends, and faculty attended the ceremony to cheer on their graduates.

Distinguished Alumnus Jeff Smith, currently the Paul T. Heyne Distinguished Chair in Economics at the University of Wisconsin, Madison, gave the keynote address. When Smith was first appointed to a chaired professorship in the Economics Department at Wisconsin, he was given the choice of who he would like to honor in his title. He chose to honor a former lecturer in our department, Paul Heyne. Heyne passed in 2000, but his legacy to the department lives on through the Economics Undergraduate Board’s Heyne Lecture series and through the memories of the many students he taught throughout his time here.

Congratulations to the Department of Economics’ Class of 2019!