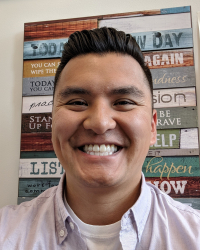 Undergraduate Economics academic counselor Patrick Pineda is ringing in ten years of supporting students at the University of Washington.

In addition to helping hundreds of both admitted and pre-major students navigate the department each quarter, Patrick is the undergraduate department's go-to adviser for all things study abroad. His dedication to fostering community extends beyond his role in academic advising as well. Outside of work, Patrick can be found working alongside the Filipino American Student Association, where he coaches students in the Sayaw Dance Troupe.

Patrick’s patience and kind disposition is apparent to anyone who knows him, and we are so appreciative to have him on our team. Thank you for all of your hard work, Patrick!