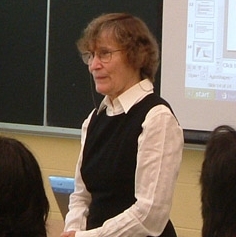 In the fall of 1974, a team of UW economics undergraduate students submitted a proposal to the National Science Foundation (NSF) hoping to receive a research grant. It was a long shot, but not only did they receive the grant – their study on the gentrification of Seattle’s Pioneer Square district, published in 1975, has remained relevant for decades after.

The fact that a study initiated and conducted entirely by undergraduates was funded by the NSF was quite rare back then. “At that time, a substantive NSF-sponsored research program was unusual,” Professor Thornton said. “Today, we are able to give many of our best economics majors the chance to tackle similarly challenging questions in their class projects and honors research. And, like that first NSF research team, our students have the skill to deliver professional results.”

In the 1970’s, questions arose as to how to redevelop and rehabilitate Pioneer Square, popularly known since the 1950’s as Seattle’s “Skid Row”. The area had been suffering a slow and steady economic decline for decades. The primary concerns that the group wanted to explore were the cost of the displacement of individuals as part of urban renovation, what the paybacks to the city would be, and where the district was headed in the coming years.

“By the middle of the 1960’s, increased public interest in the area, prompted by local tours, sparked the beginnings of a preservation movement that was eventually to culminate in the ordinance creating the Pioneer Square Historic District,” the paper noted. “Today, Pioneer Square is experiencing a remarkable economic and physical revitalization that a few years ago only seemed a remote possibility.”

The economics students involved were department honors students who enjoyed collaborating on coursework in Thornton’s micro- and macroeconomics courses. “The 1974 NSF research group formed a remarkable team,” Thornton said. “The interests of these students were diverse, but they all had a combination of intellectual curiosity, initiative, and the ability to work together as a team. They set a challenging agenda, and then delivered a research study that is still valuable today.”

It was suggested to the students by another faculty member that they all work together on an ‘Independent Study’ project with Professor Thornton, and over time the core group evolved to include sociology and urban planning majors.

“None of us had grant writing experience, so it was kind of a shot in the dark,” project manager Paul Ng, now retired from a career in corporate finance, said. “We spent 2 hours a week formulating, and the project required a commitment of a few hours a week. There wasn’t much of a formal structure and it was chaotic, but we finally got the funding.”

Project alumnus Gabe Hanzeli, who went to work for Boeing in 1975 and retired there as Director of IT in 2010, believes that Professor Thornton’s mentorship and enthusiasm was what inspired the group and kept the project going.

“All of us [students] appreciated that she was and still is an extraordinary teacher,” Hanzeli said. “She has an ability to generate enthusiasm for the subjects, to actually get you thinking. She would question things in class and get you to look at things in a different way by connecting economic theory to reality.”

The ideas presented in the paper are suggestive of the current gentrification conversations in Seattle, with the future of neighborhoods like the Central District under constant debate. “It’s interesting to see that our premises and working assumptions actually came to be true,” Ng said, referring to the considerable social disruption to low-income inhabitants of an area during and after a period of gentrification.

Many of the economics students who participated in the original research for the NSF grant remain involved with the department today – 40 years later – as volunteers in the undergraduate mentorship program, members of the Economics Visiting Committee, and participants in various Department events. The group members still keep in touch and reconnect at least once a year. Several of them went on to earn advanced degrees in economics.

“For the last 35 years, we’ve gotten together with Judy to rehash old times, recent events, and economics news,” Ng said. “At the time [of the research], none of us could foresee the payoff of all that work,” both in terms of the impact the study’s recommendations would have on the future of Pioneer Square, and in the value and quality of the friendships forged.

“The involvement of these former NSF students in a vital community study created bonds that led several of them to play a leadership role in the region’s public sector and businesses,” Thornton said.  “Today, their ongoing support as members of our visiting committee, as involved alumni, and as mentors for our undergraduates is crucial in giving our academic program its relevance and excitement.”

Thornton continued, “I feel so lucky to count these former students as my permanent friends.”