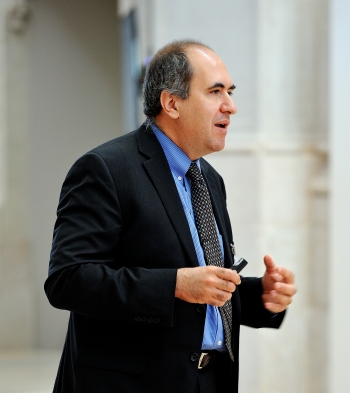 Professor Fabio Ghironi was invited to participate in two roundtable discussions at the White House, in May and again in October, to discuss the Trans-Pacific Partnership (TPP) treaty that President Obama’s administration hoped to have ratified by Congress prior to the end of Obama’s term.

The TPP treaty was signed by the U.S. and 11 other Pacific Rim countries earlier this year and aims to increase trade integration among the participating countries and harmonize regulatory standards in a variety of areas. The treaty is intended to increase U.S. exports, especially by liberalizing trade in services—where the U.S. has a comparative advantage—while codifying international standards of equity in global trade relations.

Known for his expertise in evaluating the suitability of models at the intersection of international trade and macroeconomics, and for his recent work in the areas of structural reform and the macroeconomic effects of market regulation, Professor Ghironi was asked to participate in the evaluation of various approaches to analyzing the potential outcomes of the TPP’s ratification. Much of the discussion at these meetings was around how best to present TPP to congress and leading Republicans.

However, President-elect Trump has said he intends to withdraw from the TPP on his first day in office, calling it “a potential disaster for our country” and rendering the trade pact effectively useless. In light of the 2016 Presidential election outcome, Congress is no longer planning a vote on the treaty.

In a policy paper on the issue, “TPP Is a Structural Reform: Let’s Evaluate It with Structural Models”, Ghironi concludes that the TPP treaty could be beneficial to the participating economies by streamlining and reducing trade regulations, provided that models to evaluate the effects of the treaty begin by looking at the issue from a microeconomic perspective. Ghironi notes that the outcomes of the TPP treaty could similarly impact the Obama Administration trade deal currently in negotiation with the European Union, the Trans-Atlantic Trade and Investment Partnership. Ghironi’s paper is available at http://faculty.washington.edu/ghiro/GhiroTPPModels0516.pdf.

The May meeting was followed by a press briefing organized by the White House, at which Ghironi was quoted by the Financial Times. Ghironi noted that the economic impact of presumptive Republican presidential nominee Donald Trump’s policies, which would include the imposition of hefty punitive tariffs on Chinese goods, would be most keenly felt by Trump’s constituency themselves. (The article in which Ghironi was quoted is available here: https://next.ft.com/content/307432d2-1d74-11e6-b286-cddde55ca122#a )

“TPP will create an opportunity for engagement, rather than antagonizing" China, Ghironi has said separately, thereby creating an opportunity for the U.S. to demonstrate its leadership in the region and exert greater influence on the security of global trade. A contentious issue in Washington, the decision by lawmakers on the TPP treaty later this year will have massive economic implications worldwide.