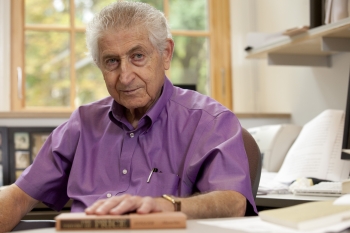 Professor Emeritus Yoram Barzel, who retired from the department in 2014 but remains active in both research and teaching, last month gave an invited keynote address at the 11th annual conference of the International Academic Association on Planning, Law, and Property Rights in Hong Kong.

Barzel presented “Information Costs, Property Rights and Markets”, a talk exploring the relationship between transaction cost and economic property rights as they factor into buyer and seller behavior over commodities.

The conference theme, Institutional Innovations in Land Development and Planning in 20th and 21st Centuries, explored 20th century development of legislation around urban planning and land management in developed economies. The conference drew scholars from around the world in disciplines including urban planning, property rights, economics, planning theory, and law.

Professor Barzel, a political economist, has published dozens of influential works, first on estimation of cost and production functions, later moving into property rights and transaction costs, and more recently also delving into political economy. He has written four books, the most recent being A Theory of the State: Economic Rights, Legal Rights, and the Scope of the State (Cambridge UP 2002). His Economic Analysis of Property Rights (Cambridge UP 1989), widely recognized as a classic in the field of New Institutional Economics, is in its second edition and has been translated into Chinese and Japanese.

Professor Barzel recently marked 55 years of service to the department and the University where he, along with Professor Emeritus Douglass North and longtime colleague Steven Cheung, co-founded the “Washington School of Thought”, an approach emphasizing the importance of transaction costs in economic analysis.