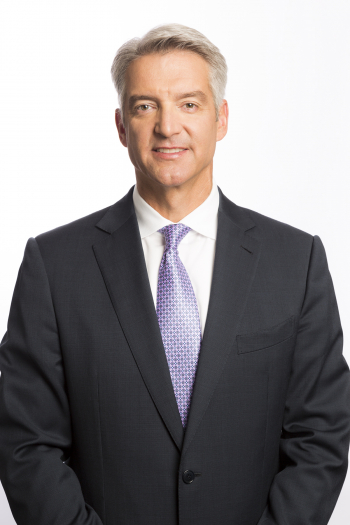 The Department of Economics is delighted to announce the selections of alumnus Jeff Roe, BA ’88, as the 2018 Economics Distinguished Alumnus. Roe joins an impressive group of alumni whose professional achievements and cumulative contributions have brought personal distinction, enhanced the profession, improved the welfare of the general public, and brought honor to the department and the UW.

Jeff Roe is the President and CEO of Premera Blue Cross, a prominent health plan headquartered in Seattle. Roe joined the company in 1996, and has served in various roles leading the company’s Employer and Individual healthcare plans. In January of 2014, Roe became President of the company. Since taking over as President, Roe has lead the company to be customer obsessed, empowered and focused on making healthcare work better.

Roe started his career working in US Senator Slade Gordon’s Washington DC office as a Legislative Assistant. The experience of working on Capitol Hill at such an early stage of his career was a particularly formative experience, and Roe was happy to be able to put his economics degree to immediate use. His experience also includes positions at Safeco Insurance, where he served as Co-President, and as Chief Marketing Officer for Torrent Technologies.

Roe graduated from the University of Washington with a double major in Economics and Political Science. He later returned to UW to compete his MBA at the Foster School of Business in 1997.

Roe lives with his wife, Perri and their three daughters, two of whom attend the UW. He is exceedingly proud of his family, and is looking forward to his eldest daughter’s graduation from UW this spring. Roe loves to be active, having climbed Mt. Rainier and completed an Ironman. He holds a deep admiration of Bill Gates for his vision and recent commitment to valuing all lives, and his hero is Abraham Lincoln.

Roe will be honored as our Distinguished Alumnus at the Department’s Graduation celebration on June 6th, where he also will be giving the commencement address.