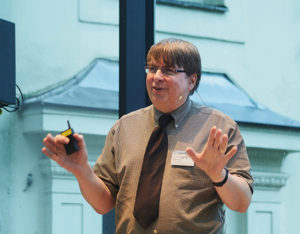 The department of Economics is delighted to announce that Jeffrey Smith, BA ’85, has been chosen as the 2019 Distinguished Alumnus. Smith joins an impressive group of alumni whose professional achievements and cumulative contributions have brought personal distinction, enhanced the profession, improved the welfare of the general public, and brought honor to the department and the UW.

Smith is currently the Paul T. Heyne Distinguished Chair in Economics at the University of Wisconsin, Madison. When he was selected for a chaired professorship at the University of Wisconsin, he was offered the opportunity to select whom he wanted to memorialize in his title.  He chose to highlight one of our beloved faculty members, under whom Smith studied. Paul Heyne passed in 2000 but his passion for undergraduate teaching is still recognized through the Paul Heyne Lecture, offered annually by the Economics Undergraduate Board (EUB).

The Distinguished Alumnus award is presented each June at the Economics Graduation Celebration, at which time the awardee delivers the commencement address to approximately 700 students and guests. The 2019 ceremony is scheduled for Tuesday, June 11, 2019 at 4:30 p.m. in the HUB ballroom.