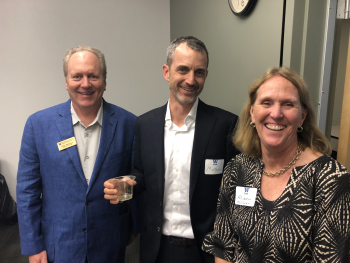 On May 2nd, The Department of Economics had the pleasure of hosting Professor Matthew Gentzkow from Stanford University for the biennial Milliman Endowed Lecture. Gentzkow’s talk, entitled, “This is your brain off Facebook: New evidence on the welfare effects of social media,” drew in a crowd of over 120 alumni, community members, and students. The audience listened attentively as Gentzkow discussed and summarized the findings of his most recent work, a comprehensive study illuminating the potential impact of the time spent on social media on overall happiness and political polarization.

Gentzkow also presented results from a study investigating the effects of current location on elderly mortality in a seminar entitled, “Place-based drivers of mortality: Evidence from migration".  The research shows how moving to some certain locations after age 65 could significantly increase life expectancy.

Currently a Professor of Economics at Stanford University, Gentzkow studies applied economics with a focus on media industries. He was awarded the 2014 John Bates Clark Medal, granted by the American Economic Association to the American economist under the age of forty who has made the most significant contribution to economic thought and knowledge. Other achievements include the 2016 Calvó-Armengol International Prize, the Alfred P. Sloan Research Fellowship, several National Science Foundation grants for research on media, and a Faculty Excellence Award for teaching. Gentzkow is a Harvard Alumni, receiving his bachelor’s degree in 1997, master’s degree in 1997, and a PhD in 2004.