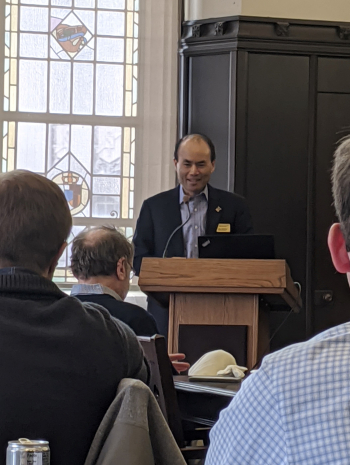 Along with the previous three former Chairs of the VC, Christina formed a search committee in the Fall to determine a list of candidates. Cary was at the top of everyone’s list, and the executive committee also gave their unanimous support. The full Visiting Committee voted by applause at the Winter Meeting to elect Cary.

Cary Oshima is an alumnus of our undergraduate program, having received his BA from the department in 1990, with honors. As an undergraduate, Cary was part of one of the first cohorts of the Economics Undergraduate Board (EUB), which started in 1989. He was also a member of the Husky Band.  Cary joined the Visiting Committee in 2009 and was soon asked to join the executive committee, which he did in 2012. Cary has also served as a mentor in the department’s Mentorship Program nearly every year since its founding in 2012. Cary is currently the Vice President of Digital Health at Cognizant, and lives with his wife and two children in Bellevue.

Cary Oshima will be taking over from the outgoing chair, Christina Tapia. Christina has lead the VC for the past five years, having been elected in 2015. She assumed the position from Dave Griswold. Christina is an alumna several times over, having received her BA with honors, MA, and PhD from UW. She joined the VC in 2011 and was appointed to the Executive committee soon after. Christina is also a Visiting Lecturer in our department and a Senior Adjunct Professor of Economics with Seattle University’s Albers School of Business. She has been a long time mentor for our department’s Mentorship Program and founded the department’s Women in Economics group in 2014.

The department cannot thank Christina enough for her years of dedication, and continued support. We look forward to continue to work with her as a Visiting Lecturer, and Executive Visiting Committee member. We are also thrilled to start this new chapter in our relationship with Cary, and cannot wait to see how the VC evolves under his leadership.