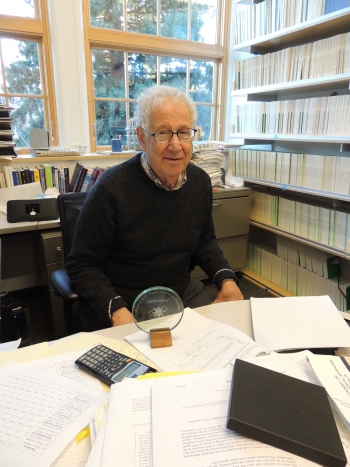 Prof. Turnovsky with his plaque commemorating his Jubilee Fellowship Honour to the ASSA in 2016 (photo: Nicole Johns)

There are 561 elected Fellows of the Academy, of which only 22 are overseas Fellows – including Turnovsky, who was elected in 1976. Established in 1971, the Academy is an interdisciplinary body of peer-elected Fellows, primarily of Australian citizenship, recognized nationally and internationally for their distinguished contributions to the social sciences in a variety of disciplines.

Along with two other scholars who have reached this milestone, Turnovsky was invited to share his reflections on his contributions to the social sciences and his points of career pride at the award ceremony and annual symposium in Canberra this past November.

"The 10 years I spent at the Australian National University (ANU) formed a crucial part of my career, and were a personally productive period on which I look back with great satisfaction and enjoyment," Turnovsky wrote in his reflections. "These were the early days in the application of control methods to economics, and it has always been a great source of pride to me that the ANU was right at the forefront of these important developments."

"Indeed, the ANU at that time provided an extraordinarily vibrant environment, with some of the most distinguished and talented individuals one could hope to meet anywhere," Turnovsky wrote. "I remember that leaving the ANU and Canberra was difficult, and I suspect that with today's virtually instantaneous communication I likely would have remained in Australia."

Originally from New Zealand, Turnovsky received his Ph.D. from Harvard University in 1968. He also received honorary doctorate degrees from Aix-Marseille University (France) in 2005 and from Victoria University of Wellington (New Zealand) in 2009. His research fields include international macroeconomics, public economics, and economic growth.